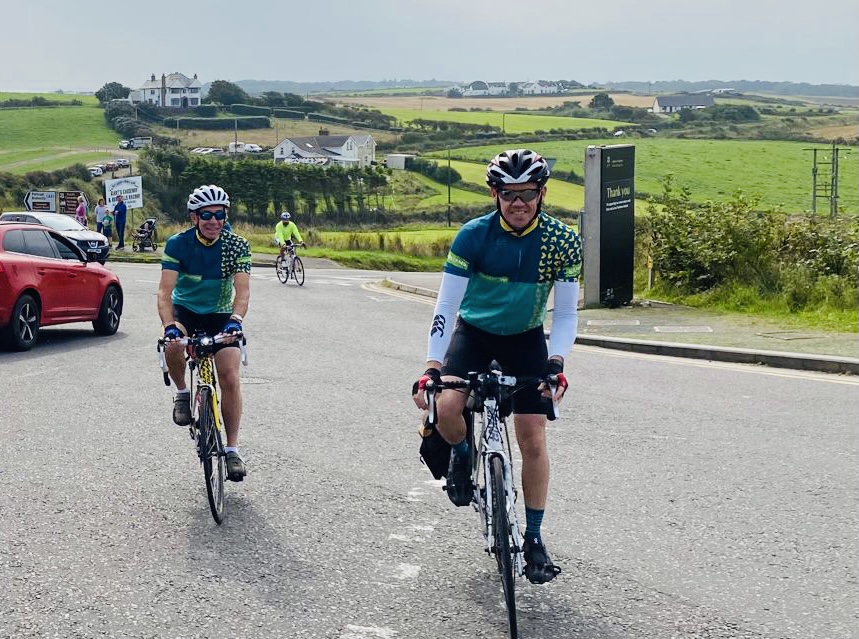 by Brian
in News
Comments

Cork to The Giants Causeway Cycle

I’ve cycled many roads with my dad, from the early years on different bikes, the odd cycle in Ireland, England, Scotland and France on our holidays. But never have I shared the road spanning the entire length of a country. What a challenge.

I had this urge to complete a big cycle before COVID kicked in and when I mentioned it to my dad, he was unphased. He was in, and he simply wanted a date and the rest would fall into place. I bought a road map of Ireland and decided that straight up the middle would be the best path. Heading to the coast would add a lot of miles and no one would thank us for that.
With an App called Komoot, we plotted a course from Cork to the Causeway and picked out some potential locations to stay overnight. We both had this App on our phones which we would use like a sat nav to get us up the country, without getting hopelessly lost.

I remember asking Sean and Wilma Laverty if they would fancy a road trip through Ireland. I didn’t have to twist their arms, they seemed interested and the dates worked well. They would drive us to Cork and stay with us for most of the trip as our own personal support crew.

It’s about a 6.30hr drive to Cork (and a longer cycle home) which meant we got there for 3.30pm and we cycled 35 miles north to Mitchelstown. We had a few gadgets with us but the oldest travelling device for me was the best. A compass. If we weren’t heading north I became anxious!

It took 10 miles to get our location to link up with our intended route, which took us all the way to our first night’s accommodation. That initial cycle was great to stretch the legs, get started and explore rural Ireland. It wasn’t too long before we were cycling along roads with grass growing down the middle. We came across a large sign for another charity cycle from Malin to Mizen head, so I was waiting for a peloton of cyclists to whizz by us at some stage, but it never happened, we must have been going too fast.

The next morning after a bowl of porridge, we said goodbye to the wild boar and deer in Ballywinlan Farm and headed for Birr. This cycle took us out of County Cork, through Tipperary and into Offlay. 75 miles in the saddle, again through the undulating rural landscape, where many of the roads were really tractor highways. At a junction in Tipperary, I got Dad to dismount and stand beside the Tipperary sign for a photo. The locals thought we were lost so a chap shouted over to ask where we were heading to. I replied Bushmills. “You what?” he said and I nonchalantly replied with a smirk, County Antrim. He said he wanted to come with instead of going back to work us and wished us well.

The donations we have received for this challenge has blown all of our expectations. As we cycled, I would receive notifications of donations and well wishes which really spurred us on. This was especially true when we would cycle past signs for villages and towns and expect the next sign would be a shorter distance, only to find the distance was the same or greater!
The weather app was used to predict what was around the corner, I can deal with rain or sunshine but I was dreading a strong head wind pushing us south. Fortunately, the head wind we had was very light and somehow, we managed to avoid the rain.

After a night in the Georgian town of Birr we set off, this time destined for County Cavan, but first we had to cycle through Counties Offaly, Meath and Westmeath. The highlight of this section was that part of our route was on a Green Way. This is a reclaimed railway track which has been turned into a cycle way. No traffic to contend with and beautiful views of the countryside. So, for 18 miles we cruised along this stretch which took us to Mullingar for lunch.

The final part of this day was eventful, to get to our accommodation in Cootehill we had to detour from our route which took us through a huge windfarm and down what can only be described as a mountain bike dirt track. As I descended with my hands on the brakes and avoiding any sharp stones, I prayed that the road wouldn’t simply end and we’d have to go back the way we came. Remember my bike wouldn’t go south. Fortunately the road rejoined a main road and the hotel was in sight.

So that was our biggest distance, 95 miles and we knew we were past halfway which made the day that bit easier.

Day 4 took us into Ulster, but before that we had 30 miles of interval training. If anyone has been on a bike in the gym, where the digital display shows peaks and troughs, well that’s what Cavan and Monaghan have to offer to the cyclist. It was tough going and I was glad to get past that section.

We didn’t meet many cyclists but just near Glaslough, on the border, we met 3 cyclists, who were sightseeing and touring and they were moving at a great speed. After a brief chat with them we discovered their bikes were electric and it wasn’t that we were getting seriously slower.

Being back in Northern Ireland gave me a boost, we were nearly home, just another 75 miles to go. We spent our last night in Maghera and Walsh’s Hotel popped our picture on their Facebook page. Any opportunity for a bit of PR was taken, the power of social media posts, the power of chatting to people and their generosity is incredible. There were a few occasions where someone would see our Samaritans top and chat to us and hand us some euros. The kindness of strangers is something to cherish.

The last leg to the Causeway was pretty special as we were joined by my brother and some friends, plus the wind had changed to a tail wind. A small change but what a difference. The 8 of us chatted as we cruised through Balnamore and down into Bushmills. Thanks to anyone who came to see us arrive at the Causeway, with people clapping at the side of the road, it certainly kept the legs turning and pushed us up that final hill.

With the funds raised reaching over £7000 we were able to get John Nicholl his Braille computer with 3 years support and insurance plus we were able to give a healthy donation to Samaritans in Coleraine.

For anyone who donated, we would like to thank you so much, you have instantly made a difference in John’s life and you will have positively influenced so many other people’s lives for years to come.

Helena Dallat O'Driscoll
15:47 17 May 22
Another professional, thorough eye test, this time for a slightly nervous 6-year-old. Lorna immediately made her feel... very welcome, helped put her at ease, and explained everything to her (and her mummy) in an accessible manner. She even had a few laughs and is wondering when she can return and if she could be an optometrist one day!read more

Violet Hamilton
19:41 23 Apr 22
When my appointment was due ! the Staff sent me a text message to me !to remind me that I was due to have my test .I... found this really helpful. The Staff are very nice and can pass the time of day!The Lady that did the test was very caring as I had surgery on my knee and I just wasn't to quick on my feet .!After my eye test we went to look at new glasses and she was really helpful! She got one of the other Staff members for a second opinion 😁 as I was unsure with so much choice of frames . Altogether it was amazing for the efficiency of the STAFF MEMBERS at John Laverty Opticians Ballymoney 💯💯💝💝read more

Olive Harvey
09:57 10 Feb 22
I have been a customer of John Laverty for 30 years and have had wonderful efficient service for all of that time. All... of my family are customers as well. Thank youread more

Elizabeth Brown
13:57 19 Jan 22
Great experience! I have just received my new glasses and I am delighted with them. Michele took time to listen, show a... variety of frames that matched my preferences and gave me plenty of time to try on and make my decision. She even ordered in a frame in a different colour to widen my choice.I really appreciated her professionalism, patience, thoughtfulness and care.read more

valerie gamble
12:31 24 Nov 21
I’ve been going to John Laverty’s Opticians for years now and I’m always greeted with a smile.The staff are very... friendly and helpful.I had a very professional eye test from Lorna and as I needed new glasses Michele guided me through the many frames which would suit me, there’s so many to choose from and costs to suit everyone’s pockets.Highly recommendread more

Wanda Donnan
19:33 25 Oct 21
Very professional and caring team in Ballymoney. Offered some tests in a respectful but not pushy manner.Explained the... different type of lenses and advised what would be best for me. Listened to what I wanted and offered their opinions and supported my choice of glasses.read more

Martin Mcguigan
15:18 14 Oct 21
Thank you to the team and especially Michelle for looking after me so well and making the experience a good one . I am... not able to wear a mask so I appreciate your understanding , kindness and careread more

Ruth Mckeeman
18:37 20 Sep 21
Great service as always, just picked up my new glasses today, two pairs as I took advantage of their offer of free... lenses in a second pair.Special thanks to Michelle for helping me choose what suited me from your display.read more

Olive Dunlop
15:20 21 Jun 21
Great experience, Lorna took time to explain my elderly relatives various eye conditions in a very clear and concise... way. And within a short space of time a potentially serious problem was referred to Ophthalmology and dealt with very effectively. Thank youread more

TF
05:54 13 Jun 21
Great shop and staff, everyone was very helpful and welcoming

Pat Gordon
19:05 16 May 21
So happy with the service and great to be back. The staff always look after you. Thanks again Pat.

Nicola Olphert
09:50 27 Jan 21
Great friendly service, very efficient and nothing was too much trouble. Brian carried out my eye test in a really... professional manner and took time to answer any questions I had. Many thanks!read more

C McMULLAN
18:18 11 Nov 20
I have gone to John Laverty Opticians since I moved to Nothern Ireland 16 years ago. I wouldn't trust my eyes to... anyone else. Now, I take my children to them as well. My eldest just had to get his first glasses and the care and attention that both the optician and the staff gave him in choosing his frames was second to none. He is one happy boy! hey take so much time with each person to make sure that they are happy with frames and give great advice. I have seen many different opticians at the Ballymoney location during the years and every single one of them has given me the best service. They have been patient and kind and are great with children. All of the staff are professional and friendly. I honestly wouldn't go anywhere else for my eye care!read more
Next Reviews